Following on for our very recent blog which described the neural mechanisms implicated in negative urgency we now look at at an article which attempts to  bring together some of our most consuming research interests by attempting to explain whether there is  a  link between emotional processing deficits (alexithymia)  negative urgency and dysregulated behaviours.

Dysregulated behaviors have been defined as behaviors that are difficult to control, and often  result in functional impairment for the affected individual (Selby & Joiner, 2009). Although  psychological disorders have a wide array of symptoms, virtually all of them are characterized by some form of dysregulated behavior that usually impacts quality of life in a negative way (e.g., binge eating and self-injury).

The purpose of this study was to evaluate potential affective variables which may contribute to behavioral dysregulation— specifically alexithymia and negative urgency.

Researchers have theorized that the inability to understand affective
and physiological experiences inherent in alexithymia might prompt individuals to engage in maladaptive behaviors in an effort to regulate emotions. One type of behavior linked to alexithymia is binge eating. Wheeler and colleagues (2005) found that alexithymia was positively correlated with binge eating in a sample of females. Similarly, Larsen et al. (2006) found men with high levels of alexithymia are at the  greatest risk for emotional eating.

In addition to binge eating, there are other dysregulated behaviors that have been shown to relate to alexithymia. Taylor and colleagues (1990) found that 50% of substance dependent males admitted to a drug and alcohol rehabilitation program were characterized as alexithymic.
Similarly, Haviland and colleagues (1988) found that approximately 50% of individuals diagnosed as alcohol dependent were characterized as alexithymic. These numbers are significantly greater than the reported prevalence of alexithymia in the general population, which has been estimated to fall between 10 and 15% (Rybakowski et al., 1988; Parker et al., 1989), and suggests that alcohol and drug abuse is another example of a maladaptive behavior that may be used to modulate negative affective states when one is incapable of doing so in an adaptive way.

Several studies have also found that alexithymia appears to play a role in treatment outcome for substance abusers. For example, Loas and colleagues (1997) conducted a one year follow-up on individuals admitted to a psychiatric facility for alcohol treatment. Results suggested that individuals who remained abstinent from alcohol use one year post-treatment had
significantly lower scores on alexithymia measures. Ziolkowski and colleagues (1995) also found similar results, in that scores on an alexithymia measure were inversely related to time of abstinence from alcohol, such that higher scores on alexithymia predicted fewer months of abstinence.

Self-injurious behaviors have also been significantly correlated with alexithymia. In one study (1996), Zlotnick and colleagues found
that rates of alexithymia were significantly higher among individuals who reported a history of self-injury. Interestingly, 79% of these subjects also reported a history of childhood sexual abuse. This finding is important, as it highlights the likelihood that alexithymia may be particularly troublesome for those who have experienced past trauma, rendering them less able to
appropriately deal with negative affect. In turn, they may attempt to alleviate negative affect through dysregulated behaviors. In fact, Paivio & McCulloch (2004) found that alexithymia mediated the relationship between childhood abuse and self-injurious behavior. In other words, alexithymia accounted for the self-injurious behaviors that were seen in individuals with past
trauma, such as abuse. In addition to negatively impacting individuals directly, the above findings also suggest that alexithymia may have a powerful, negative impact on treatment outcomes. 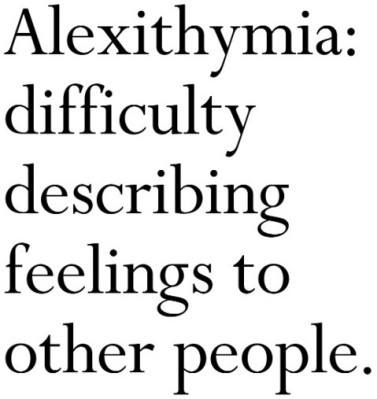 “An important question left unexplained by the above findings is, “why does the lack of understanding and expression of emotions have such a powerful influence over dysregulated behaviors?”

Why  do individuals with high levels of alexithymia who experience negative affect seem to engage in dysregulated behaviors so frequently, while other individuals may simply cry, ruminate, or develop vegetative symptoms of depression?

Is negative urgency (Whiteside & Lynam, 2001; Cyders, Smith, Spillane, Fischer, Annus, & Peterson, 2007) the mechanism through which these behaviors are developed  and sustained?     It may be that the relationship between alexithymia and behavior is explained by a tendency on the part of individuals with high levels of alexithymia to act rashly in an attempt to immediately reduce psychological and physiological sensations associated with negative affect.           Negative urgency could be thought the  mechanism that drives dysregulated behaviors in individuals who experience difficulty recognizing and expressing their emotions.

Consistent with previous research, the results of this above study demonstrated that both alexithymia and negative urgency are correlated with maladaptive behavioral outcomes, such as binge eating.

Other facets of impulsivity, as defined by Whiteside & Lynam (2001), as
potential mediators – lack of perseverance and sensation seeking—did not mediate the relationship between alexithymia and behavioral outcomes.

The authors concluded that when faced with negative affect, many individuals are able to recognize and process their emotions adaptively. However, if people are not able to identify or describe their emotions (the very definition of alexithymia), our results suggest that this confusing affective experience may be quite upsetting, and could lead to negative urgency, or a tendency to act rashly when they experience any type of negative affect.

High alexithymia individuals appear to be highly motivated to alleviate negative affect, regardless of the consequences. It may be that the emotional confusion inherent in alexithymia prompts individuals high on negative urgency to engage in dysregulated behaviors, by acting out either
against themselves or others.

As we mentioned in our previous blog  emotional processing deficits are common in addiction and in other dysregualted behaviours and these deficits may not recruit the goal-directed parts of the brain. They do not guide action or choices effectively. As a result they manifest in perhaps crude, undifferentiated or processed forms as distress signals instead and recruit more limbic, motoric regions of the brain.  Hence they are not used to anticipate future, long term consequence.

We disagree that it is not simply negative affect that prompts negative urgency but rather the chronic stress dsyregulation underpinning the manifestation of negative affect. Stress chemicals acting as a fuel to this explosive, immediate and undifferentiated (or crude) responding.

We are simply adding that as addiction becomes more chronic, so does stress and emotional distress and this appears to lead to a distress-based “fight or flight” responding to decision making. Addicts increasing appear to recruit sub-cortical or limbic areas in decision making and this is prevalent in abstinence as in active using. It is the consequence of chronic and stress dysregulation.

References for this blog

a Five sets of 12 pictures were selected from the International Affective Picture System (40) according to their pleasantness (positive, negative,
or neutral valence) and emotional intensity (high or low arousal) on the basis of International Affective Picture System norms.b The bars on the left show the range of z scores for statistical parametric mapping of the comparisons showing differences in regional cerebral activation between men with and without alexithymia in response to contrasts of negative pictures versus their controls and positive pictures