Following on from our recent blog on “What does Recovery mean to you?” we now look at the process of recovery itself and important changes that contribute to successful recovery.

Many recovering persons report quitting drugs because they are ‘sick and tired’ of the drug life. Recovery is the path to a better life but that path is often challenging and stressful.

However, the main message from this study (1) is that those individuals who manage to get to  5 or more years abstinence have an 86% chance of long term recovery !

Not only does it make ethical, moral and medical sense to spend much more on treatment facilities it makes makes very obvious financial sense.

This has led to multiple calls to define and better understand and study “recovery” in terms of not only abstinence but improvements in health, mental health, coping, housing, social and spiritual support, illegal activity, and vocational engagement (Betty Ford Consensus Panel [in press]; Laudet, Morgen, and White 2006; Laudet, White, and Storey [in press]; White 2005).

Using data from 1,162 adults living in a large metropolitan area who sought substance abuse treatment in 1998 and who were subsequently interviewed annually between Years 2 and 8 (greater than 94% follow-up rate each year), this study addresses the following four questions:

1. How do health, mental health, and coping vary by duration of abstinence?

2. How do illegal activity, incarceration, employment, and family income vary by duration of abstinence?

3. How do housing, clean and sober friends, recovery environment, self-efficacy to resist relapse, and social and spiritual support vary by duration of abstinence?

4. How does the likelihood of sustaining abstinence another year vary by the duration of abstinence?

Although this often involves some period of residential treatment or incarceration, such costs are typically offset by reductions in other costs to society, increased employment, and increased productivity (Bray et al. 2000; French, Salome, and Carney 2002; McCollister and French 2003; Rajkumar and French 1997; Single et al. 1998).

Abstinence is generally associated with being housed and having some friends, fewer problems in the recovery environment, and more personal, family, social, and spiritual support.

Risks (e.g., substance use among family, friends, and victimization) and protective factors (e.g., treatment and self-help participation, peers in recovery) in the recovery environment and self-efficacy to resist relapse were also among the major predictors of transitions from using to recovery and relapse (Humphreys, Moos, and Cohen 1997; Schutte et al. 2001; Scott et al. 2005b).

The general association between relapse and stress has also been found to be moderated by the extent of support one gets from self-perceived personal strengths, family, and social peers (Jessor, Turbin, and Costa 1998, Laudet et al. 2004; Miller 1998; Miller et al. 1996; Procidano and Heller 1983; Schutte et al. 2001). 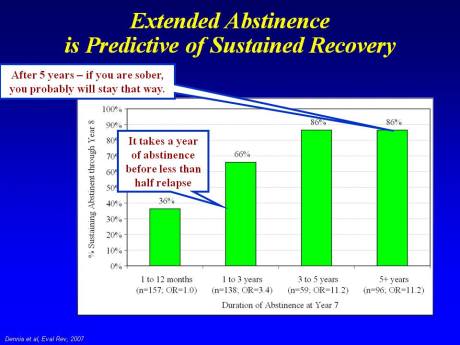 We found no studies to date using the “duration of abstinence” to predict the likelihood of sustaining abstinence for another year. However, a recent extensive review by Moos and Moos (2007) found one or more of four dozen studies reporting that the odds of sustaining abstinence was positively associated with abstinence self-efficacy, approach coping styles, vocational engagement, income, having clean and sober friends, and having social and spiritual support and inversely related to an avoidance approach coping style.

Findings – This study demonstrates that duration of abstinence is related to changes in other aspects of recovery but at different rates and times.

The rapid decrease in illegal activity and illegal income sustained across varying lengths of abstinence was consistent with the literature given that many of the crimes were drug related. Following 1 year of abstinence, the number of days worked and legal income generated significantly increased and days with financial problems decreased. After 3 years of abstinence, there were also significant reductions in the percentage of families living below the poverty line, which indicates continued gains in financial status.

Consistent with the literature, the duration of abstinence was associated with reduced environmental risks and increased number of clean and sober friends, level of social support, spiritual support, and self-efficacy to resist relapse.

The odds of sustaining abstinence increased dramatically during the first 3 years and then leveled off. Among people with 5 or more years of abstinence, there was still some risk of relapse (14%) – but equally a 86% chance of remaining in recovery!

Findings suggest the need for a shift from focusing on acute episodes of treatment to the management of recovery during longer periods of time.

Most of the drug abuse treatment research to date has focused on reducing days of use or abstinence in the first 6 to 12 months after treatment (Dennis and Scott [in press]; Prendergast et al. 2002). More health services research is needed on managing long-term recovery, both in terms of how to deliver it in ways that are both effective and cost effective for multiple years. This includes research on ways to integrate these other kinds of services, minimize some of the negative trends (e.g., the early peak in mental health problems), and accelerate the positive trends (e.g., more positive recovery environment and vocational activity).

Although much of the research on substance abuse treatment outcomes has focused on abstinence in the first 6 to 12 months after treatment, this article suggests that initial abstinence and the initial time period do not fully represent the changes associated with long-term recovery. This research shows that risk of relapse is particularly problematic in the first 3 years of abstinence and never completely goes away, suggesting the need for promoting strategies and programs that support the long-term management of recovery.

An easier way to live with acceptance, compassion, and transformational self healing.