A Combined Stress and Dopamine Model of Addiction

Towards a psycho-neuro-endocrinological theory of addiction

Our model posits that increasingly excessive levels of stress impact on dopaminergic systems to produce neuro-anatomical alterations in the brain which reflect addiction severity and increasingly limited cortical and explicit control over behaviour.  The brain progressively “implodes” towards sub-cortical, compulsive and unconscious responding.

Stress – Most physiological stressors exert their effects on the hypothalamic-pituitary-adrenal axis (HPA axis), the primary endocrine stress pathway, which initiated by the release of corticotrophin-releasing factor (CRF), stimulates synthesis and release of adrenocorticotropin (ACTH) which stimulates synthesis and release of GCs (corticosterone in rodents,  cortisol in humans). Stress also activates the sympathetic adrenomedullary system and the release of NE (51).

There are close interactions between the HPA axis and mesocorticolimbic dopaminergic system, with CRF, GCs and NE all impacting on these pathways.

In animal models, stressors, such as footshock (52) and tail pinch (53), produce an increase in dopamine release in the nucleus accumbens (NAc) and enhance amphetamine and cocaine self administration in animals (54,55).

Drugs dramatically alter NE pathways in the VS and DS (64, 65) and ventromedial PFC with consequence for regulating distress and exerting cognitive and behavioral control (8).

The responsiveness of noradrenergic systems to stressors (66) and cocaine (67), in rats, poses NE as one mechanism through which drug re-exposure and stressful environmental stimuli promote relapse (68).  Injections of α2-adrenoceptor agonists, clonidine and lofexidine, in the brain block stress-induced reinstatement in cocaine-, heroin- and alcohol-trained rats (69, 70). Conversely, infusions of a D1 receptor antagonist, SCH23390, blocked footshock stress-induced reinstatement (71 – see 72 for review).

CRF also has extensive influence across corticostriatal-limbic regions (8, 78), acting on the mesolimbic dopamine system (79), including dopaminergic neurons in VTA and their projections to NaC, PFC and amygdala (80).

GCs have a permissive effect upon mesolimbic dopamine (82). GCs alter mesolimbic dopamine signaling, amplifying the initial positive reinforcing effects of alcohol and drugs (1), with reward mediated by glucocorticoid receptors (GRs) located on neurons throughout the mesolimbic dopamine reward pathway (81). GR antagonists have been shown to decrease dopamine levels in the NAc by 50% (82).

Molecular changes associated with stress and drug addiction are also similar. In rodent studies, CRF directly influences proliferation of DA receptors in NaC neurons by upregulating CREB, a transcription factor that plays a pivotal role in DA receptor-mediated nuclear signaling and neuroplasticity. This interaction may explain the stress-facilitation of reward (83-86). Similarly, chronic stress increases ΔFosB (another transcription factor) levels in the NAc as well as in PFC and BLA (87).

Altered stress systems affect initial substance use by impacting on the reward circuitry of individuals with a vulnerability to maladaptive stress response (37). Early-life and chronic stress impact upon mesolimbic DA pathways (40) sensitizing the reward system and increasing vulnerability to later addiction.

Stress Based Wanting- Negative affect persists so wanting has an emotional dimension, “needing”, as demonstrated by craving inducement, whether cue or stress-based, eliciting negative emotions.

Drug cues activate the stress axis and when presentation of cue is preceded by stress, the response-reinstating actions of the cue are greatly increased (17). Elevated stress directly enhances cue-induced activation of brain areas associated with reward processing,  attentional bias and memory recall (21); consistent with allostasis, as the brain introduces “experience, memories, and the re-evaluation of needs in anticipation of physiological requirements” (17).

Compulsion (phase 3) – This is a beyond the compulsive wanting of the C-L-S loop; relapse prompted by extreme emotional distress and a “to hell with it” reaction.  Reward, memory, emotional regulation and behaviour control all become DS-dependent.

Reward – stress activates the DS (87) and substance-related cues elicit dopamine release in DS (88) in line with addiction severity, suggesting the strengthening of substance-related habits as addiction progresses. This reflects a shift in reward processing from the VS to DS.

Stress and dopamine are both involved in habit learning (89, 90).  Lesions to the DS dopamine prevent habit formation (91).

Memory – elevated stress triggers excessive engagement of habitual processes, by changing the role of memory systems in behaviour. For example, acute stress before a learning task results in a predominantly habitual rather than a cognition-based role of memory in task completion (35).

Chronic stress causes opposing structural changes in neural networks subserving goal-directed and habitual action, with PFC atrophy and DS hypertrophy (35). Bias toward habitual responding after chronic stress may accelerate these transitions from initially goal-directed to habitual and compulsive action with reduced cognitive control interacting with overshooting stress reactivity to influence the progression from initial drug use to addiction.

GCs may act in concert with NE to shift instrumental action from goal-directed to habitual (93-95). 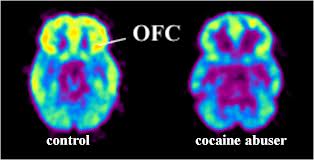 Behaviour control – post mortem analyses show changes in the neurochemistry of the PFC following chronic drug abuse, with impaired PFC and enhanced DS. GCs can act as a switch between these two memory systems and modulate a DS-based habit system over the PFC-based goal-directed system thus rendering behaviour habitual rather than goal-directed, accompanied by reduced explicit knowledge of action-outcome associations which may contribute insight into why addicts relapse despite often being aware of the negative consequences (96-100).